The 2023 Legislature: Your Constitutional Rights Are in Jeopardy 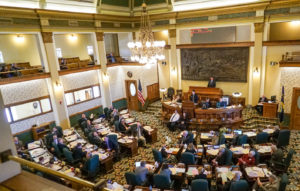 In case anyone was thinking that Montana’s 2023 Legislative Session might be better for the environment than the grueling 2021 Session, their hopes were dashed after the election. The session is going to be brutal for those who care about clean air, clean water, a healthy climate, and corporate accountability. Republicans will hold a supermajority, which spells serious trouble for Montanan’s constitutional rights. Thank heavens that the judicial branch will have some ability to temper the most unconstitutional proposals.

Unfortunately, a Republican supermajority means the Legislature can put constitutional amendments on the next general election ballot with the vote of 100 of the State’s 150 legislators. With Democrats slated to hold fewer than 50 of the 150 seats in the two houses at the time of this writing, Republicans alone can pass proposals to amend and weaken Montana’s Constitution and send those proposals to the voters in the next general election. Our right to a clean and healthful environment, right to participate, right to know, right to privacy, and so much more, are in jeopardy.

In addition to changes in Montana’s constitutional protections, there is a rumor that there will be an effort to repeal the Montana Environmental Policy Act (MEPA). MEPA provides the public with the opportunity to participate in governmental decision-making and to know the suite of social, economic, environmental and cultural impacts of proposed projects before they receive state permits or approvals.

We are also very likely to see an emboldened NorthWestern Energy, which may result in NorthWestern trying to reinstate pre-approval of generation assets by the Montana Public Service Commission, change the planning process to make it easier to build expensive methane gas plants instead of clean energy, and purchase a larger share of the Colstrip coal-fired power plant at customers’ expense. After two previous failed attempts to force customers to pay for the liabilities of a larger share of the expensive old power plant, NorthWestern may well try a third time. Other Colstrip plant owners are likely to follow Puget Sound Energy’s lead and attempt to transfer their share of the plant to the bankrupt plant operator and minority part owner, Talen Energy, or NorthWestern. NorthWestern is desperate to keep the plant open until 2042 in order to continue to collect the hundreds of millions of dollars it is charging customers  – even if the plant does not operate often.

Other rotten ideas that are likely to crop up involve deregulating the land use planning, zoning and subdivision processes under the false premise of creating affordable housing. Montana desperately needs affordable housing but simply eliminating land use protection laws will not result in affordable housing. Instead, it will create unmitigated development, likely mansions, far from towns and water and sewer infrastructure, increasing reliance on vehicles and related greenhouse gas emissions, and harming wildlife, water, and agriculturally productive lands.

Water quality protections are in jeopardy. Deregulating water pollution from mining operations will definitely be on the agenda, as will efforts to further weaken the exempt well law which puts increased pressure on scarce water resources and agricultural users. There is likely to be an effort to interfere with the public’s ability to access the judicial system to get relief when the government fails to protect people and wildlife from pollution or large industrial operations. It is also likely that there will be another attempt to force nonprofits to disclose their memberships. Gov. Greg Gianforte vetoed such a bill last session because it applied to all nonprofits. This session, legislators are likely to narrowly target progressive organizations. If that occurs, MEIC will vigorously work to defend our members’ constitutional right to associate without being subject to disclosure.

While most of Montana’s cities will retain legislative delegations that are willing to protect the environment from greed-fueled corporate interests, the same cannot be said of Great Falls. What was once a bastion of legislative conservation champions has completely degraded; some of whom led the charge last session against Montanans’ right to a clean and healthful environment and other constitutional protections. This session, we are likely to see an emboldened anti-environmental delegation from Great Falls. If you’re an MEIC member in Great Falls, we’ve got your back and we will work with you to make sure your voice is heard.

This session will require each and every person who cares about our fundamental rights to engage. MEIC urges you to start now. Call your Representative and Senator and ask them to protect your rights, as well as clean air, clean water, and the climate. Democracy is not a right to which we are entitled. It is a privilege and obligation that requires constant vigilance. This session will take all of us working together to protect our rights.

This article was published in the Dec. 2022 issue of Down To Earth.

Previous Story:
Sustainable Communities Legislative Outlook
Next Story:
From a Board Member