A tour of the Landusky mine site in September 2021. Photo by Katy Spence.

One of Gov. Gianforte’s more brazen decisions in his first year in office, which will have broad ranging implications for Montana’s land and people, is the dismissal of the “Bad Actor” enforcement action against Phillips S. Baker and Hecla Mining Co. Gov. Gianforte’s decision to let Baker off “scot free,” essentially allowing him to continue conducting mining activities in Montana, firmly establishes the Gianforte Administration’s posture and governing style as a corporatocracy that is willing to bend or break the rules for those with money, power, and influence. Montana has been down this road before.
We’ve covered the Bad Actor controversy in previous issues of Down to Earth, and many Montanans are well aware of the tragic events in the Little Rocky Mountains (and other places in Montana) which led up to former Gov. Steve Bullock’s Administration instigating an enforcement action against both Baker and Hecla.

To make a long story short, starting back in the 1980s, Pegasus Gold operated several mines in the state. In the late ’90s, Pegasus declared bankruptcy and defaulted on its reclamation obligations for its Montana mines, including Zortman-Landusky and Beal Mountain. The Pegasus bankruptcy has since been characterized as an environmental “nightmare” in which Pegasus skipped out on conducting reclamation, forcing taxpayers to pay for reclamation and treatment of toxic mine tailings and water. To date, public expenditures for the reclamation of Pegasus’ mining operations have amounted to at least $77 million at Zortman-Landusky alone, with no end in sight for the reclamation and water treatment to address the perpetual acid mine drainage.
Notably, at the time of Pegasus’ bankruptcy, Baker held the position of Chief Financial Officer in the company. The damage at Zortman-Landusky is truly jaw-dropping and a disaster for the people who are most directly affected by living downstream: the Fort Belknap Indian Community.

Repercussions and political responses immediately followed Pegasus’ bankruptcy. In 2001, the Republican-controlled Montana Legislature overwhelmingly passed (and then-Gov. Judy Martz signed) an update to the “Bad Actor” Law which prevented corporations — and their directors — that had defaulted on reclamation obligations at hardrock mines from receiving new operating permits. This type of law fundamentally recognizes that adequate and full reclamation of the land is the cost of doing business in Montana. Indeed, it’s enshrined in our constitution, which states in Article IX, Section 2 that “all lands disturbed by the taking of natural resources shall be reclaimed.” It’s also part of the good manners that we are taught in grade school: “Clean up the mess you make before you get out another toy.” 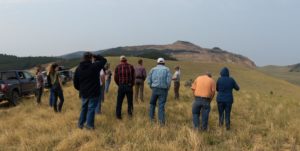 Stakeholders view the Zortman mine site in September 2021. Photo by Katy Spence, MEIC.

Baker is now the CEO of Hecla Mining, an Idaho-based corporation that is attempting to develop two mines on the flanks of the Cabinet Mountains Wilderness in northwest Montana. MEIC and a coalition of environmental and conservation organizations alerted the Bullock Administration to this serious violation of the Bad Actor law, and the Administration subsequently took action, as it should, through enforcement at Montana Department of Environmental Quality (DEQ), which predictably ended up in court. When the Gianforte Administration came to power, however, DEQ was directed to file a motion to dismiss its own legal action, abruptly announcing that it would no longer be pursuing enforcement of the Bad Actor law against Hecla or Baker. This decision was politically motivated and sets an extremely poor precedent for determining when and how laws should be enforced.

Unfortunately for Gov. Gianforte, the enforcement of the Bad Actor law does not contain an exception for political expediency or for rich people who may be implicated. Its enforcement is a mandatory duty that DEQ is obligated to pursue. Due to Gov. Gianforte’s abject failure in enforcing the clean water protections in our mining laws by dismissing his own department’s action against Hecla and Baker, a coalition of Tribes and citizens groups stood up and pushed back. The Fort Belknap Indian Community, the Confederated Salish and Kootenai Tribes, the Ksanka Elders Advisory Committee, and several environmental and conservation organizations, including MEIC, filed a lawsuit on November 10 against DEQ and its director, because the agency is not enforcing the Bad Actor law.

The Montanore and Rock Creek Mines would actually tunnel underneath a federally designated Wilderness Area: the Cabinet Mountains Wilderness. This area is also a culturally significant place for the Kootenai people, many of whom are very concerned about the impacts that could occur should mining proceed.

“The Cabinet Mountains hold an important position in the relationship between the Ksanka people and all of creation,” Vernon Finley, a member of the Ksanka Elders Advisory Committee and the Confederated Salish and Kootenai Tribes, recently stated in a press release. “The ‘Bad Actor’ law is the best way to hold people responsible for attempting to heal the wounds inflicted on nature. To simply free someone from their responsibility is to allow them to do it again and is unforgivable.”

Hecla’s proposed mines will also mar the wilderness character of one of Montana’s originally designated Wilderness Areas, which received that status with the passage of the Wilderness Act in 1964. The mines will also have major impacts on the fish and wildlife of the Cabinet Mountains Wilderness. Endangered bull trout and grizzly bears would undoubtedly suffer from the industrialization of the area through dewatering, sediment pollution, road building, traffic, and blasting. The clean water of the Cabinets Wilderness, which the U.S. Forest Service characterizes as “rated … among the top 5% purest water in the lower 48 states,” would also be placed in jeopardy from mining pollution.

Of course, Gov. Gianforte didn’t have to bend to an out-of-state mining corporation and its wealthy executive. He could have done right for Montana, the Tribes, and the Cabinet Mountains by continuing to pursue the Bad Actor enforcement action. But that would have required him to have political courage. Instead, MEIC and its partners were forced to go to court. MEIC is proudly represented in the litigation by Earthjustice, and is joined as a plaintiff by the aforementioned tribes, Earthworks, Clark Fork Coalition, Rock Creek Alliance, Montana Conservation Voters, Montana Trout Unlimited, and Cabinet Resources Group.