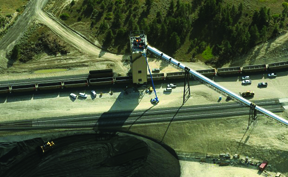 Coal mining, especially underground coal mining, is a dangerous occupation that puts workers and citizens at risk, causes fatalities, and brings about life-long injuries. This holds true at Montana’s lone underground coal mine, the Signal Peak mine in the Bull Mountains, whose short but checkered history, epitomizes an industry that more closely guards its profits than its workers well-being.

The flagrant disregard the mining industry showed for its workers and miners ultimately prompted the U.S. Congress in 1977 to pass the Federal Mine Safety and Health Act (FMSHA), to enforce compliance with mandatory safety and health standards to make coal mines safer for workers and to improve conditions at mines. The Mine Safety and Health Administration (MSHA) is the federal agency that is charged with enforcing the FMSHA, including coal mining in Montana.

A recent investigation into coal companies operating in Ohio by the Cleveland Plain Dealer found that Ohio coal companies are, as a matter of course, fighting and routinely winning against federal fines levied by the MSHA. Why? Because in many instances they can receive reduced fines or avoid paying the fine altogether. It comes down to dollars and cents, and ultimately their bottom line. The most flagrant abuser of the system being Murray Energy Corp., a company headed by the notorious CEO Robert Murray. Murray Energy Corp. is most notably responsible in the western U.S. for a mine collapse in Utah in 2007 that killed nine people (the fine for the disaster was negotiated down, by the way).

Unfortunately, the practice of routinely challenging fines for safety violations is not confined to Ohio, but takes place right here in Montana as well. The Bull Mountain Mine, south of Roundup, is Montana’s only operating underground coal mine. Mining has occurred in the Bull Mountain area since the early 20th century, but recently production increased noticeably with the purchase of Bull Mountain by Signal Peak Energy, LLC.

An analysis done of MSHA’s online database on enforcement actions and fines from August 19, 2008 to the present shows that Signal Peak has made it routine practice to contest substantial fines levied for safety and health violations at the Bull Mountain Mine. Shockingly, Signal Peak and its contractors at the mine have had over 800 safety violations since August 2008, when it purchased the mine.

Of the 813 safety violations that occurred at the Bull Mountain mine, 23 are characterized as “High Dollar” citations (citations and orders assessed at $10,000 or more) by MSHA. The total in penalties levied against Signal Peak and its contractors for these 17 violations amounts to $751,066. Of that amount, approximately $88,200 has been paid, or 12% of the total in fines. Why that enormous disparity? Because Signal Peak and its contractors have made it routine practice to challenge almost every “High Dollar” citation by MSHA, and is currently delaying payment by contesting 17 of the violations.

But let’s not stop there. In fines ranging from $1,000 to $9,999, which we will call “Mid Dollar” citations, Signal Peak and contractors have racked up approximately $288,034.00 in fines. Of that amount, approximately $69,904 has been paid, or only 24% of the total fines. There’s also a huge number of challenges below the $1,000 mark, but many go unchallenged and Signal Peak or the contractor pay the fine, likely the result of costing more to pay a lawyer (thanks to these law firm websites) to contest the fine, then to pay the fine.

What’s truly unnerving about Signal Peak’s routine practice of challenging violations is that the fines are the enforcement tool for safety standards that protect people’s lives and limbs. A few examples:

It’s disheartening that Signal Peak and other coal mine operators across the country are abusing the appeals process for safety standards. Standards save lives. Standards protect workers life and limb. The MSHA needs to have the ability to enforce these standards, and Signal Peak should pony up when they violate them.

Perhaps Signal Peak could use some of the 50% reduction in property taxes it recently requested and received from Yellowstone County for the next five years to settle up with MSHA.

Previous Story:
EPA urged to rewrite or ditch CO2 standards for new coal plants
Next Story:
Down to Earth – May 2013