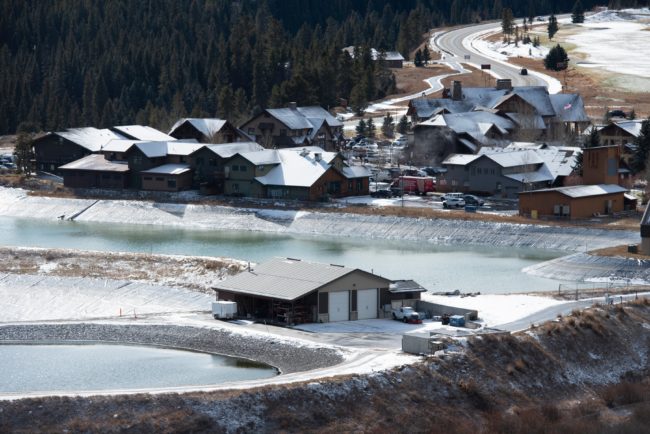 Developments such as this one in Big Sky threaten nearby waterways. Photo by Samuel Wilson, Report for America.

It’s a worn-out statement, but it still rings true: Montana’s world-class rivers, streams, and lakes are the lifeblood of our state. Much of our social and economic activity is tethered to, or even completely dependent upon, the natural cycle of precipitation, snowpack, runoff, and in-stream flow that continually recharges our waterways. It’s clear that how we interact with and manage our water resources are critical in determining the health and economic vitality of our state. For me, a major part of growing up in Montana was growing up around Montana’s rivers and streams, such as the Madison and Gallatin Rivers, where I learned how to fly fish and to appreciate what we have.

As an example of how important water is for Montana, the federal Department of Commerce’s Bureau of Economic Analysis recently released figures on the economic impact associated with outdoor recreation. In Montana, outdoor recreation accounted for 4.3% of the state’s GDP, the highest percentage in the entire U.S. Outdoor recreation added $2.2 billion to the Montana economy in 2020, with boating and fishing alone contributing approximately $288 million in value-added activity. Of course, these numbers focus exclusively on recreation, but there are innumerable other benefits of clean water to agriculture, livestock production, and municipal water supplies.

Therefore, it’s a bit shocking to learn that the State is doing a relatively poor job of preventing pollution from ending up in our water. A recent analysis by the Montana Department of Environmental Quality (DEQ) shows that more than 70% of Montana’s waterways and lakes are not fully supporting aquatic life (an indicator of poor stream and lake health) due to excessive sediment and siltation, chemical pollution, or alteration of stream channels and vegetative covers.

Under the federal Clean Water Act, Montana is required to conduct an assessment of our water quality and prepare a report every two years. The 2020 Water Quality Integrated Report identified over 200 rivers and streams in Montana as being impaired by nitrogen and/or phosphorus.

Nutrient pollution, such as that caused by excess nitrogen or phosphorus, is a leading cause of water quality impairments in Montana. Surprising as it may be, it is possible for too many nutrients to end up in our waterways. Combined with less and warming water, excess nutrients promote the growth of algae and algal blooms, which suck up large amounts of oxygen that fish and other organisms need to survive. Algal blooms also promote discoloration of the water, which can reduce the ability of aquatic life to find food.

Excess nutrients end up in our rivers and streams from a variety of sources, including agricultural runoff (fertilizers and livestock feeding operations), leaky septic systems, sewage treatment discharges, detergents, and stormwater runoff. There are two sources of water pollution: Point source pollution emanates from a single source and is often literally discharged from a pipe. Nonpoint sources are much more diffuse and spread across the landscape. Due to the innumerable sources of nutrient pollution from a variety of activities, preventing and mitigating nutrient pollution can be a challenging endeavor.

Montana was one of the first states to adopt a “numeric” limit to nutrient pollution in its waterways. This placed a specific and measurable limit on the amount of nutrient pollution that could be discharged into waterways. While having numeric nutrient limits was not perfect, it was a far better system than the previous narrative approach.

But then, the 2021 Montana Legislature decided to pump the brakes and drive the truck right into the algae-filled ditch by directing the State to abandon numeric standards and return to the old system of defining pollution limits. Gov. Gianforte signed SB 358 (Sen. John Esp, R-Big Timber), which repealed numeric nutrient limits. The bill directed DEQ to regulate nutrient pollution through the less effective “narrative” approach and watershed-level adaptive management plans. The legislation also directed DEQ to develop a set of regulations. Since the legislation’s passage, a set of stakeholders has been meeting monthly (along with a technical advisory committee) to develop the regulations. MEIC has been participating in this process and has worked closely with other partners, including Upper Missouri Waterkeeper, to ensure that conservation and water quality are properly considered.

DEQ is about to release a draft set of regulations. Unfortunately, it appears that the major recommendations from MEIC and its partners were ignored. If the new regulations are adopted, Montana’s waterways will undoubtedly suffer from even more nutrient pollution. The new regulations take a “pollution management” approach rather than a “pollution prevention” approach, and they almost completely ignore the principal source of pollution: nonpoint source pollution.

Clean water is critical for Montana. It’s not just important for fish and aquatic life but also for businesses, the economy, and human health. And for folks like me who want a chance to continue visiting the Gallatin River to catch a few trout.