BILLINGS, Mont. (AP) — The state of Montana has reduced the cleanup bond it is requiring to guarantee the cleanup of coal ash near the Colstrip power plant in southeastern Montana, but the state is still requiring a full cleanup.

Talen Energy appealed after the state set the bond at $285 million in late 2020. Talen, which operates the plant, argued state environmental regulators chose the most costly cleanup method, when less costly methods would work.

Earlier this week, the Department of Environmental Quality agreed to reduce the bond by at least $120 million, The Billings Gazette reported.

But the state is still requiring that all of the coal ash be removed and stored in a dry area. Currently, about 6.7 million cubic yards (5.1 million cubic meters) of coal ash is stored in waste ponds. Coal ash is the waste left after burning coal and contains heavy metals that can be dissolved by water. 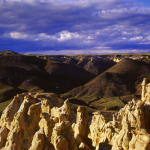