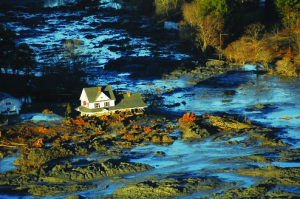 This week brought good news.  After years of negotiation, litigation, promises made, and promises broken, MEIC, a Native American tribe, and public health and environmental organizations signed a legally-binding agreement with the U.S. Environmental Protection Agency, saying that EPA must adopt regulations for safe coal ash disposal by the end of 2014.

After the Tennessee coal ash disaster in 2008, Obama promised to adopt the first-ever federal controls for safe disposal of the second largest waste stream in the country. That was welcome news to those living near Colstrip’s contaminated coal ash ponds (a.k.a. 800 acres of leaking coal sludge impoundments). EPA then hired consultants to investigate coal ash impoundments, including those at Colstrip. Those consultants found that Colstrip’s dams posed a very real danger to human health and downstream economic activity, yet neither state nor federal governments had ever inspected the dams. EPA promised to do something about the nation’s dangerous coal waste disposal problems.

In 2010 EPA proposed the first-ever federal rules to regulate this toxic waste stream. People living in the shadow of these impoundments cheered. But then EPA balked. It never finalized either of its proposals.

This settlement brings to a close the nagging question of whether EPA will ever do its job. Now the question is whether EPA will adopt a regulation that actually requires cleanup of these highly contaminated sites, ensures safe storage of waste in the future, and allows effective enforcement by government and citizens when government fails. None of those things seem like too much to demand. But Congress likes to interfere when EPA actually does its job. So while this settlement is a good step, we will have to keep pressure on EPA to actually protect public health and safety.

Previous Story:
Thank You for Your Support in 2013!
Next Story:
MEIC sues Attorney General over records