On Tuesday, April 27, representatives Bill Mercer, Jimmy Patelis and Emma Kerr-Carpenter met with senators Ryan Osmundson, David Howard and Ryan Lynch to hash out differences between the House and Senate on HB 693, a subsidiary of the Legislature’s broader spending bill, House Bill 2. Within 20 minutes, a handful of amendments had been added or pulled from the bill and the committee voted to approve the bill as amended.

Rep. Bill Mercer, R-Billings, said he was concerned that the public didn’t have an opportunity to comment on Ankney’s amendment and that lawmakers who’d spent months working on HB 2 and HB 693 didn’t engage in meaningful discussion about the amendment prior to its introduction.

“I think we need to strike it for process reasons, without getting into a discussion about substance,” he said. 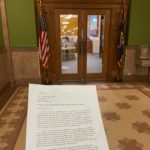 Contact committees or legislators online using this link. You can also call 406-444-4800 and leave a message regarding a bill.
↑