Mining is a dirty business. There’s really no way around it. Mitigation activities can certainly be incorporated into mining plans, but these steps often only reduce, not eliminate, mining’s environmental impacts and damage.

The fact is that extracting large volumes of minerals from the earth is energy-intensive, displaces all other activities during the mining process, involves exposure of water to toxins, and generates enormous amounts of waste. These are unfortunate realities. Where mines are permitted and how they are regulated, including the specific environmental and permitting standards that are used, are absolutely critical in deciding how we obtain the metals needed to power modern society and the ever-growing clean energy sector.

The process for permitting mines, including its public involvement component, is arguably just as important as the substantive environmental standards. Developing a fair and equitable process that adequately informs and involves the public is not easy but, if conducted properly, can help to avoid the worst environmental outcomes of the mining activity.

Montana does have strong public participation and “right-to-know” provisions in its Constitution that have assisted and bolstered MEIC in its work to fight the most egregious mining proposals. However, the way in which the State of Montana conducts the permitting and oversight of hardrock mines receives an F grade when it comes to environmental justice.

Montana mining laws do not provide for the fair treatment and protection of all Montanans, regardless of their background, from the worst impacts associated with mining. In fact, it’s clear that the mining laws and regulations on the books encourage, rather than prohibit, inequity.

To expand upon that definition, Detroiters Working for Environmental Justice has noted that “certain groups in society bear unequal environmental and economic burdens such as poor air and water quality, as well as unhealthy living conditions resulting from industrial, municipal, and commercial operations and/or federal, state, and local laws, regulations, and policies.” While procedures can be developed that involve and treat all people fairly, the reality often means that communities with less representation, money, or influence suffer the environmental impacts of mining and other activities more than those with more power.

In part, this is why real life examples abound in Montana of the failure to live up to these human rights standards. Most, if not all, of the environmental catastrophes in Montana have an environmental justice story woven in and around them. Two recent examples involving MEIC’s work come to mind. In both cases, we are working for a more fair and meaningful process in environmental decision making, whether through state laws requiring such consideration or in individual permitting decisions. 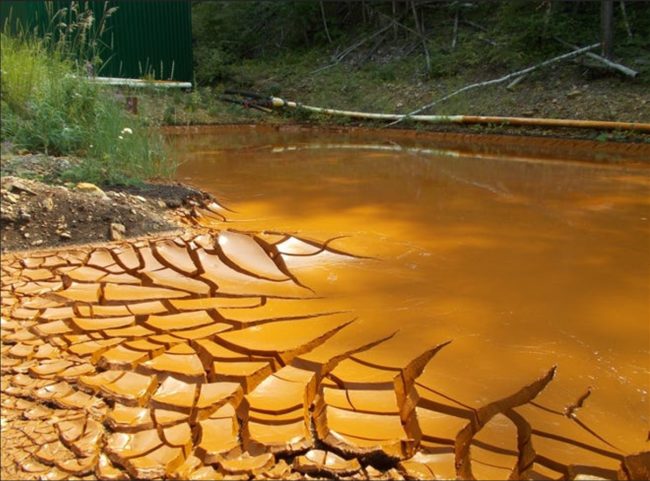 Acid mine sludge settles at the Swift Gulch Treatment Plant. The sludge will be buried at the Landusky site. Photo by Karl Puckett.

Since the bankruptcy of Pegasus Gold in the late 1990s, the defunct Zortman-Landusky mines in north-central Montana have been held up as an ugly poster child for how to not permit and conduct mining and reclamation activities. The devastation caused by Pegasus in the Little Rockies will live in infamy as one of Montana’s most egregious environmental disasters during the last century (for more background on Zortman-Landusky, see the “Bad Actor” story on pg. 4). Tens of millions of public dollars have been spent in attempting to address the ongoing pollution problem at Zortman-Landusky, which will require treatment in perpetuity and has poisoned a water source for the Fort Belknap Tribe.

A very small and under-capitalized company known as Blue Arc, based in Bozeman, recently began exploration activities at the Zortman reclamation site, with the explicit authorization of the Montana Department of Environmental Quality (DEQ). This approval was given by DEQ without any consultation of, or consent by, the Fort Belknap Tribe, which is now an unwitting party to yet another set of risks and dangers associated with mining in the Little Rockies. The fact that DEQ did not believe that it was appropriate or required to consult the Fort Belknap Tribe on new mining activities at Zortman, let alone receive consent from the Tribe, speaks volumes about the inequity of mining laws in Montana. 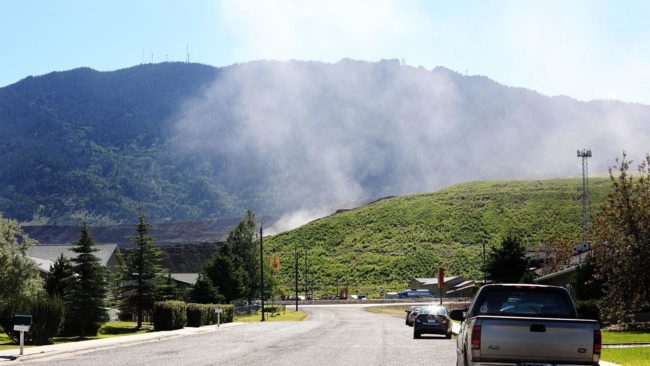 Dust from a blast at Montana Resources’ open-pit mine in 2018. Photo by Meagan Thompson.

Butte is no stranger to mining nor to the serious environmental impacts associated with both historic and modern operations. Montana Resources currently operates an open-pit operation in Butte that is causing impacts to the air quality for the Greeley Neighborhood, one of Butte’s most historic and lowest income neighborhoods that is directly adjacent to the mine.

Specifically, the mine generates an enormous amount of dust associated with the blasting, hauling, and crushing of the ore. The debate is ongoing as to whether the dust is a mere irritant or represents a much more substantial health threat. Residents of the Greeley neighborhood believe it is far more than a minor nuisance.

In 2020, 60% of Greeley residents were living at the poverty level. They have brought their concerns in numerous forums and fashions to the Butte-Silver Bow government, as well as to DEQ. Responses have been largely pro forma, including the health impacts of the dust and holding community forums. What hasn’t happened? Anything at the mine in response to reasonable requests by the Greeley residents to address, abate, and mitigate the activities that are harming a vulnerable population.

While Butte is a heavily industrialized area with a long history of mining, its land and its people should not be treated as a sacrifice zone and a sacrifice population.

Previous Story:
Why We Need Your Help With the 2021 Northwest Power Plan