Cryptocurrency is a virtual currency that only exists as computer code. Proponents of crypto tout its decentralized nature and “secure” transactions through a public ledger called blockchain that construct a financial system apart from the world’s traditional banking systems. While these arguments have appeal, the rest of the story is more than a little troubling.

Through a computational process called “mining,” users can sometimes earn cryptocurrency without having to buy it outright. Huge facilities are dedicated to this mining, and the process is incredibly energy intensive. One such operation recently reinvigorated the Hardin Generating Station. This 115-megawatt coal-fired power plant was likely to close after NorthWestern Energy declined to acquire the plant in 2018. Shortly thereafter, the plant was purchased by a cryptocurrency company and now it appears to exist solely to provide electricity  to mine the profitable currency. Just this November, it was revealed that the cryptocurrency company is under investigation by  the U.S. Securities and Exchange Commission for violations of securities laws.

This graph shows how the coal-fired Hardin Generating Station began to emit more and more after being purchased by a cryptocurrency mining company. Read the article in the Guardian.

While the energy demand and resulting greenhouse gas emissions of cryptocurrency are by far the most concerning environmental factors, more information has come to light about the origin and use of the digital currency. Namely, Bitcoin and other digital currencies are used on the “dark” or “deep” web, a part of the Internet that’s difficult to access and is often used as a way to buy drugs and weapons, and conduct other illicit or dangerous activities. Forbes magazine has reported that the use of Bitcoin on the dark web increased 340% between 2017 and 2020. By 2019, Bitcoin fueled a more than $1 billion black market on the dark web. 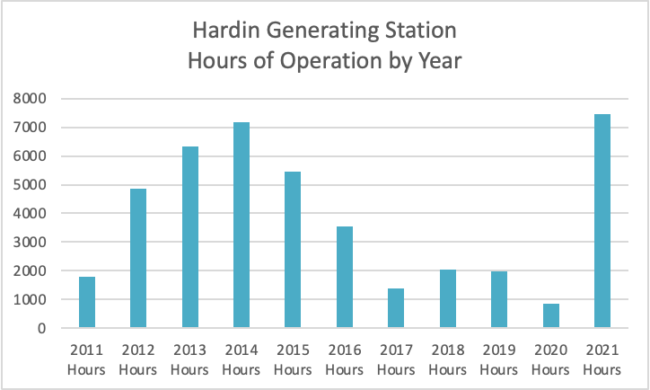 Check out this report from Sierra Club and Earthjustice.