The Smith River is an important part of Helena’s recreation and tourist economy. In fact, a study conducted on the Smith River’s economic impact to southwestern Montana’s recreation economy estimated that it generates close to $10 million in economic activity, close to $3 million in salaries and wages, and approximately $750,000 in state and local tax revenues. The resolution notes that several Helena area citizens and business are dependent upon the Smith River, in part, for their income. Year after year Helenans from all walks of life enjoy the river. In 2016 alone, approximately 966 residents in the city of Helena applied for a permit to float the Smith, and approximately 100 were successful.

A small Canadian company, Tintina Resources, has partnered with an Australian mining firm and applied for a permit to develop a large copper mine directly adjacent to and underneath Sheep Creek, at the headwaters of the Smith River. The proposed mine is of particular concern because the mine must disturb sulfide minerals, which when exposed to air and water, can form sulfuric acid in a process known as acid mine drainage. Acid mine drainage is highly toxic to fish and other aquatic life. Furthermore, groundwater pumping from mining activities could lower the water table, and create a “cone of depression” that extends to the Sheep Creek alluvium – posing a threat to adjacent stream flows. The Smith River, and Sheep Creek, already suffer from low flows during most years, putting pressure on downstream water users and preventing the fishery from reaching its potential.

Please take 1 minute and ask the Helena City Commission to make a statement on the importance of the Smith River to Helena’s economy and Montana’s conservation legacy. 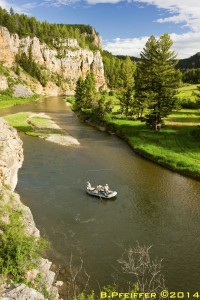